BLOCKCHAIN TECHNOLOGY: A PRIMER FOR CONSULTANTS 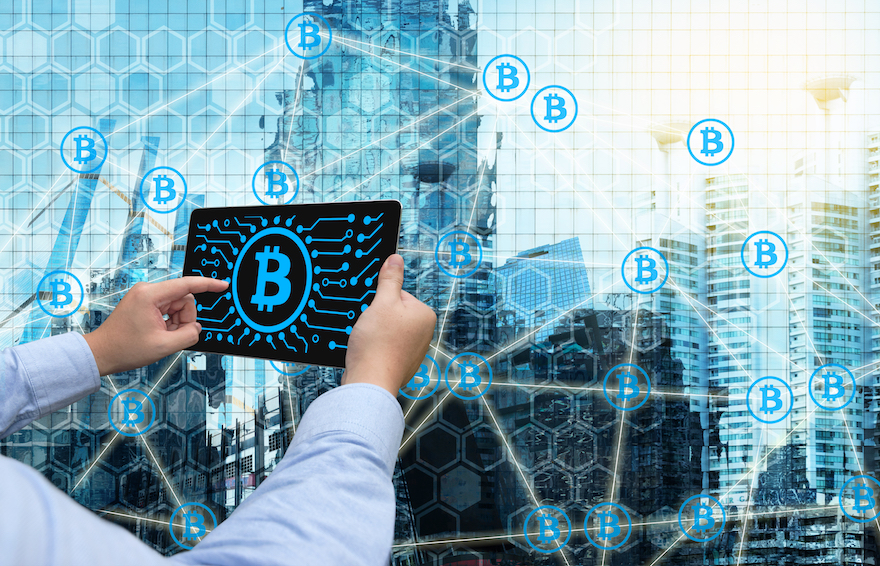 A  few months ago, I was speaking at a Blockchain Meetup of over 500 attendees in Toronto. Several speakers remarked that living in the Blockchain space was like being in 1985 during the Internet’s early days. More recently another speaker noted that we are now in 1989, relative to the Internet era. “Wow,” I remarked, “we’ve grown four years in five short months, that’s 10 times (10x) growth for you!”

Blockchain technology is moving so quickly that it’s challenging to keep up even for those of us within the area. And many professionals don’t yet understand the basics let alone the many critical subtleties one must consider when assessing it. One could argue that even some of the popular narratives and explanations of blockchain are somewhat dated and may even be misleading. So, let’s get started with the key tenets of blockchain, and then address where the technology is headed in the near future.

What is Blockchain?
Blockchain is a distributed network of computers ("nodes") that utilize the underlying infrastructure of the Internet to validate and process transactions of some value. These transactions are validated and added to "blocks" of data that are processed in a pre-defined interval of time (i.e. 12 seconds, 10 minutes, etc.).

Blockchain uses existing cryptography schemes to append new blocks to previous blocks. This way, blocks are never overwritten or destroyed, just appended to, forming a chain of blocks, hence the term "blockchain". This chain of blocks is synchronized across all of the nodes by providing an economic incentive to the node that is able to first validate and then add the block to the chain by solving a complex mathematical task.

Each node on the blockchain network maintains the same chain of blocks, also called a "ledger" as in an accounting ledger of records. This chain of blocks or ledger of records is distributed across multiple nodes that agree to the correct state of the ledger through the process of consensus. Different consensus mechanisms exist, but the most common one is called proof-of-work, as described here. Once a block has been added to the blockchain, it becomes an immutable record.

Blockchain is not new: in fact, the earliest blockchain, known as Bitcoin, has been functioning successfully since January 2009. Yes, Bitcoin has some negative perceptions, but don’t blame the technology or the concept for the wrong-doing of some people. And more importantly, don’t ignore it and either miss-out on the world’s biggest opportunity in our era or end up becoming irrelevant in a few years. Bitcoin is one of many different flavours of blockchain platforms in existence today, Ethereum and Hyperledger Fabric being a couple of other popular blockchain infrastructure platforms.

Blockchain has been called the 'next Internet', the 'Internet of value'. What is this new Internet of value exactly? Let me explain this through an example. The current Internet facilitates communications and the sharing of information. It is great at it: we can send each other information, we can learn, collaborate, socialize, and work using the Internet. In fact, one could argue we couldn’t function without it.

The Internet is great at sharing information. I can create this article, retain the master copy and post it online for you to read. You have a version of my article, but I retain the master. Alternatively, I can also email you a copy of my article. In either case, if I change the master article, and don’t post it online or send you an update, you now have an outdated version. To overcome this problem, solutions like Google Docs enable people to share documents and collaborate online in real time. This way, everyone shares the instance of the article.

All of the afore-mentioned scenarios work when the object (as in the case of my article) has no tangible value. Think about something of value such as money: it would not be such a great thing if I sent you a copy of a dollar and retained the original. That would be fraud. Yes, one can send and receive money online and via banks, but when you think of doing this across international boundaries or for a small fraction of money, then the existing solutions are too expensive, take too long, or just cannot handle the fractional value of the transaction.

This is where blockchain comes in. It leverages a combination of several existing technologies innovatively to address the challenges of the traditional Internet and of existing systems (in this example – financial systems), and enables the transfer of value (cryptocurrency currency, digital assets of any kind) almost instantly at a fraction of the cost and time of the traditional way. It also stores the record of such a transaction in an immutable and tamper-proof manner by distributing the record across a large distributed or decentralized network.

Trouble in Paradise?
While the narrative I have shared thus far has been widely discussed - and is true for public blockchains - the recent spike in cryptocurrency values and network congestion (as a result of scaling limitations of public blockchains) have led led to increased cost of transactions. And there is a trade-off between how much you pay for your transaction to be processed quickly and how long you wait. Therefore, this early narrative of bitcoin blockchain and other public blockchain needs some refinement.

To really appreciate the approach to blockchain you would want to adopt for your organization or startup, you really need to learn about this in a meaningful way: the blockchain and distributed ledger technologies and architectures, the blockchain ecosystem, smart contracts, decentralized autonomous organizations, cryptocurrencies and tokens, business opportunities, disruptive threats, and brand new business models being created. Understanding governance models and how to plan and implement the right blockchain solution are critical to success.

Time Flies Faster in 'Blockchain space'
First, the rate at which blockchain activity is growing has fast outpaced what we saw at similar stages of the Internet. This is understandable, as most disruptive technologies are disrupting at a faster rate now. Of note though, is that not only is the activity accelerating exponentially in blockchain, blockchain has eclipsed most of other trending tech over the last few years (see Figure 1 below). 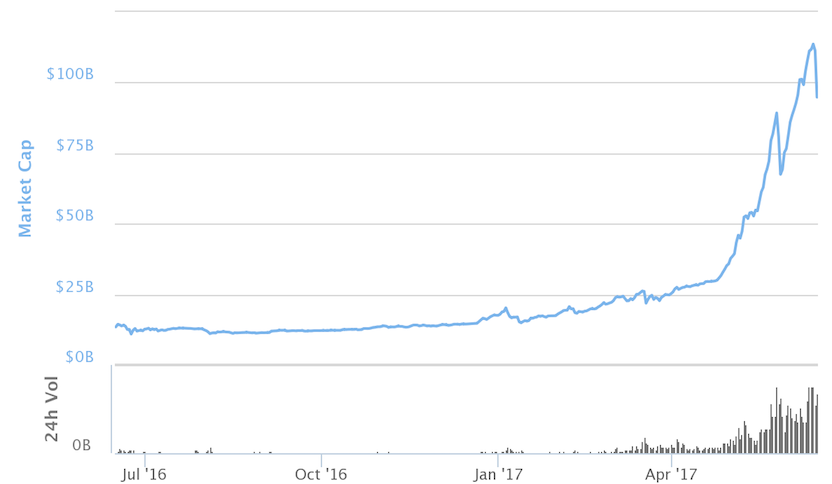 And some currencies have gone 8x to 50x over the last few months (Figure 4). 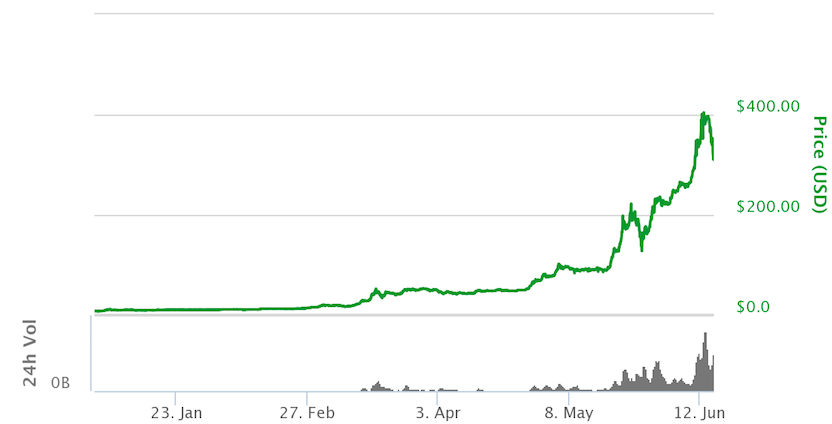 The velocity at which capital is being raised through Initial Coin Offerings (ICOs) will make anyone in funding venture and capital markets take serious note (Figure 5).

And I can write a book on this, but it would be out of date by the time I finished the first chapter.

However, one thing that may surprise you is that while maturity of blockchain will likely take 5+ years, don’t kid yourself: many of us were saying it will take at least 10 to 15 years just a year ago. 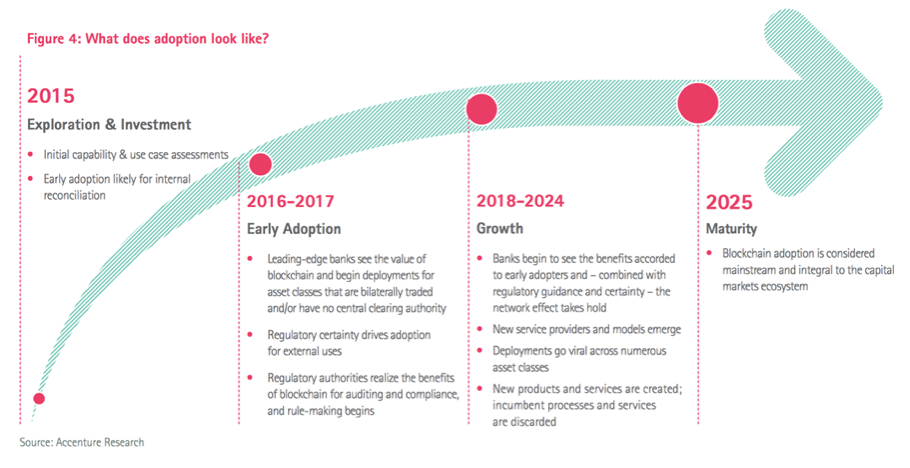 These are exciting times, but they are also times to be very careful.

Your Business is Being Disrupted Already – Delay and be Disrupted
The reality is that most businesses operate under some form of existing regulation, are either themselves an intermediary, or are working within an eco-system of value chain partners that are intermediaries. So, when one hears of blockchain dis-intermediating the central authority or the middleman as its main goal, it raises some concerns as well as presenting new opportunities.

Organizations do realize that despite concerns, they cannot ignore blockchain, so many are starting to explore blockchain technology via a proof-of-concept. Before starting with a particular solution or selecting a vendor, however, it is critical that one assess the many considerations that come into play when selecting the best approach to exploring blockchain.

Disintermediation of parties alone provides for a limited view of the potential of blockchain. When one speaks with enterprise decision-makers, there are more questions about blockchain than answers, illustrating the challenge with blockchain when it comes to an enterprise: the fact is that there are a multitude of complex considerations:

And the questions go on. 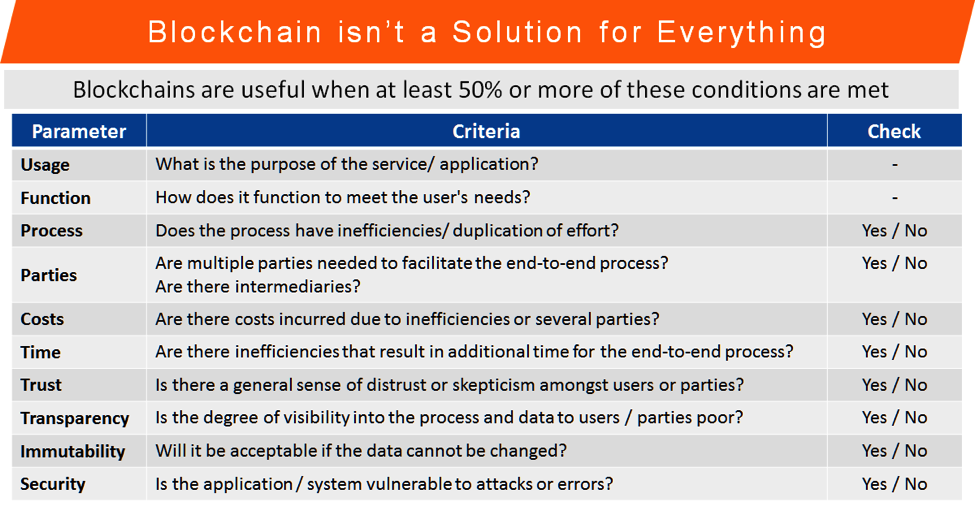 What Can You Do?
The answer, if there is one-answer, is that 'it depends'. And, as cliché as it sounds, it really is true. What this really means is that there is no one approach or secret recipe that would apply. Also, blockchain doesn’t make sense for everyone and for many use cases. One has to go through a process of understanding the business, application and user needs, and take into considerations external factors such as the regulatory environment, etc. before determining the approach.

An enterprise needs to keep multiple considerations in mind in order to assess the best technology, platform, solution, and overall approach to its blockchain implementation. These include:

Once all of these are determined, you can decide the platform solution that best meets your needs or your clients' needs.

Want to learn more about blockchain? Participate in workshops available through TransformationWorx. The blockchain training available includes courses, in partnership with the CIO Association of Canada, that lead you to obtaining the CIO Certified Blockchain Professional Designation. To learn more, visit Transformationworx.com or contact Dawood at dkhan@redmobileco.com 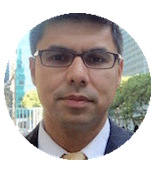 Dawood Khan is a Partner at RedMobile Consulting and Founder of TransformationWorx Inc. RedMobile Consulting is an innovative consultancy that is a trusted advisor to the world's leading public and private sector organizations. TransformationWorx is a startup focused on organizational resource capability and professional development in high-demand areas of emerging tech. TransformationWorx has partnered with the CIO Association of Canada to offer the “CIO Certified Professional” designation training in Blockchain and Digital Transformation. The program has a leading faculty of industry experts and a cross-sector Board of Advisors representing C-level executives from leading organizations including the TMX Group (TSX, TSE), Scotiabank, P&G, and IBM.

Mr. Khan has been providing Management, Innovation and Technology consulting services and advising executives and business leaders for over 23 years. He is an industry expert in business and digital transformation, and use of smart, emerging and legacy technologies to innovatively meet business goals. He has worked with clients on developing mainstream innovation focused strategies, plans, business cases, get funding for capital projects, and develop technology investment and ROI assessments for clients in several different sectors including municipalities, retail, financial institutions, public safety, and telecom carriers.