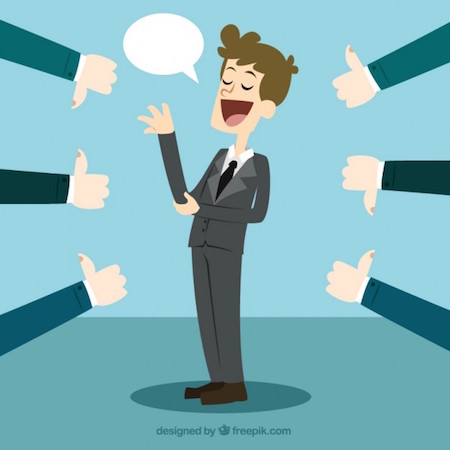 Have you ever given someone feedback that you thought was warranted and needed, and have the person not listen to it, not accept it, or even outright reject it?

From your perspective, all the right elements were in place. Your intent was to help the person improve, you picked a time where you could have an uninterrupted and private conversation, you were prepared with facts, and you followed one of the processes that you learned over the course of your career. But yet, nothing! In fact, the person may have been defensive, discounted your feedback, got up and left, told you to “get lost”, or worse.

Why don’t leaders (or anyone for that matter) accept feedback? It's about them.
They may have been given the same feedback in the past, or this may be the first time. In either case, they don’t accept it and therefore don’t act on it.  In fact, they may harbour resentment towards you for providing it. There may be a number of things going on:

1. They may believe they are incapable of ever making a mistake, or needing to improve. This is often seen in people with high levels of narcissistic tendencies.

2. They don’t accept the feedback because they don’t see themselves in the same way as the person that’s providing it. This can be a matter of perception, delusion, or a lack of self-awareness.

3. They already know what you told them, but don’t care.

4. They already know what you told them, but don’t want to acknowledge there is any substance to the feedback because then they would be obligated to take action.

5. They think they are above receiving any kind of feedback and therefore, reject it, as well as the person giving it.

6. They aren’t ready to receive the feedback. This may be due to a confidence issue, the stage in their career, or a belief that constructive criticism is negative.

7. They have a fixed mindset, not a growth mindset, believing that each person is born with specific intelligence and skills, and growth and development is not possible.

Or…it’s about you.
1. Your message may not have resonated with them. This may be due to your approach, use of language, or complexity of the message. Simplicity, clarity, and being direct is recommended.

2. You didn’t present the feedback in a way that helped them understand why it was important to receive it and how their behaviour might impact them or others. For example, “You showed up late again for a meeting. This is the fifth time.” states the facts but not what the impact is. A better approach might be: “When you repeatedly show up 10 minutes late for a meeting, you hold all of us up. As well, you are role modelling, in a negative way, behaviour for others on the team to do the same”.

3. You made feedback personal rather than being professional and fact-based. An example of this would be saying “you are a terrible person” as opposed to “I’m disappointed that you chose to call me out on a decision that we had already agreed to”.

4. Your feedback was not specific. Saying “you did a poor job” is not specific, does not provide any information about what was poorly done, and is not helpful.

6. You were not fully aware of the context of the situation, causing you to reach an inaccurate conclusion. Lack of information or gaps in your knowledge decreases your personal and professional credibility.

7. You’ve made incorrect assumptions that cause a leader to negate your feedback, raising questions about your credibility and reliability.

8. You based your feedback on third-party information and not fact.

There may be other factors at play in the non-acceptance of constructive feedback.
These include:

1. The timing may not be good. Constructive feedback provided in-the-moment and off-the cuff is usually not the best. After a particularly contentious meeting, with emotions running high, it is best to cool down before having a discussion. Thoughtful, considered feedback will always be more acceptable than emotionally-charged feedback.

2. The location may not be appropriate. Hallways and coffee rooms are public locations. Think about where you are and find a private location before providing feedback.

What approaches have you found that work? And what don’t?

Dr. Wilma Slenders works with leaders, their teams, and their companies to help them grow faster, perform better and achieve more. She is the founder of four companies in four different industry sectors, including Transcend Management Advisors Inc., a 20-year old consulting company. Wilma is a Certified Management Consultant, a Professional Certified Coach, and a Change Management Professional. She earned a PhD in Leadership from Capella University and a Master of Science in Management from Boston University in Brussels. For more info, visit: www.transcendmgt.com.